“Forefoot joints were frequently affected on an individual level, but did not significantly improve the measurement range or precision of 28-joint counts in patients with early RA. From a measurement perspective, reduced joint counts are appropriate for use on a population level. The contribution of assessing forefoot joints on an individual level requires further investigation,” Contribution of assessing forefoot joints in early rheumatoid arthritis patients: Insights from item response theory.

The patients studied were part of the Dutch Rheumatoid Arthritis Monitoring (DREAM) remission induction cohort, included from early RA diagnosis. The 459 people with active disease were 62% female and rated their general health as rather low on a visual analogue scale (average of 50 on a scale of 100). 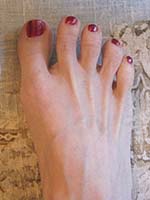 Previous comments by patients about the use of the word forefoot cause me to laugh (which is a good thing actually) now every time I read “forefoot.” Animals we love have forefeet, but the same word is used for the anatomical front part of a human foot: toe joints and the associated bones. Like I always say, this disease teaches patients a lot of anatomy.

Yes. Of the 459 patients, 233 had tender joints in the forefoot, and swelling was detected in 200 patients.

Did it affect the joint counts?

Is it reasonable to assume the DAS28 gives an accurate measure of how “active the rheumatoid arthritis is at this moment”?

Not from my perspective.

Some say disease activity may be underestimated when feet are excluded, but this study claims that there is not a significant difference for the average patient. The problem is that the “average patient” is a statistical mean of patients, and a specific patient is not the average patient of course. In adding forefoot joints, the joint count increased by two on average, but it obviously could me more or less in a particular person.

If the issue is what to use for measurement in academic studies, I appreciate the author’s argument that a DAS28 takes less time than a DAS38. However, most studies do take place during actual clinical treatment, and my concern is always for actual patients. There are problems with relying on DAS28.

Easy peasy – not so much…

It sounds simple enough: “Just assess the number of swollen and tender joints and measure the ESR.” But living with Rheumatoid disease – or reading about it here on RAW – you know better. You know people fall through the cracks because this disease is not really a “a type of arthritis.” You know that Rheumatoid disease doesn’t care that there are no joints in the lungs or the eyes, and that the disease doesn’t always start in the hands.

Each foot contains 33 joints. No matter how many times I read the paragraphs about the statistical methods used by these investigators, I’m skeptical that by including only 28 joints of the entire body, we get an accurate assessment of disease activity.

29 thoughts on “Forefeet and the DAS28: a Healthy Dose of Skepticism”