It’s been too long since I told an elephant joke. When I was little, I carried this book around making the adults miserable. Why stop now?

Q. Why is an elephant large, gray, and wrinkly? (Answer below post.)

How long do Rheumatoid Arthritis patients stick with Biologics? 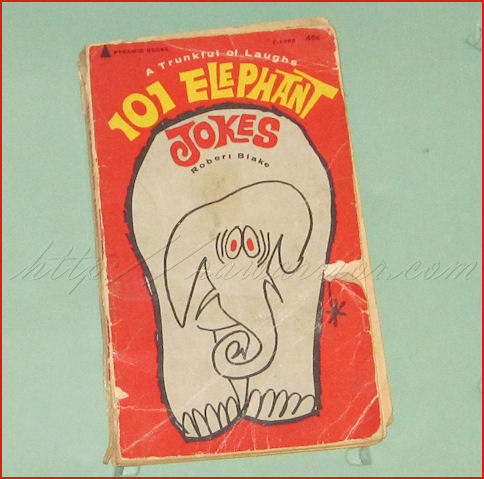 There is a lot of variation about when to change Biologics for Rheumatoid Arthritis.  I think the quickest I saw someone burn through Biologic options was 5 in 9 months. That’s probably an extreme example, but I have been surprised at how differently doctors treat this questioon. This is one of issues where Rheumatoid Arthritis care is so diverse, a topic of another blog I have in progress.

I’ve often wondered what’s right. How long do have to stick with a Biologic for Rheumatoid Arthritis before giving up? Does anyone know?

Why should we care how often we change Biologics?

It’s simple: There is a limited supply of Biologics, so it makes a big difference. It’s entirely possible to run out of options and I’ve seen it happen.

Changing Biologics can also lead to another ironic problem. If a Biologic is working modestly at one point, it may not work as well if it is tried again at a later time. Sometimes Rheumatoid Arthritis patients are more likely to have developed resistance to a Biologic when they try it a second time.

It sounds like these doctors would recommend waiting out the full six months before giving up on a Biologic. However, one doctor told MedPage Today “that a three-month DMARD trial is enough for some patients. ‘I would definitely switch therapy if the patient has not [improved] in three months,’ she said. On the other hand, van der Heijde said, she would wait longer in patients who have shown some symptom reduction but have not met the standards for low disease activity after three months.”

Read the details of the Biologics / Rheumatoid Arthritis study at this link in Rheumatology News. The majority of the patients in the study eventually responded very well, but I have two hesitations regarding the study. It is a small single-center study, which means that all of the patients were treated and rated by the same clinical personnel. If they had any bias, it could not be balanced by other contributors. Second, while they used established numerical standards to determine remission and low disease activity, I may also wonder about the judgments which lead to the scores in the first place. The reason is that we do not have a way to know the tendency of this particular center to declare patients as “controlled” or “clinical remission.” I have a healthy skepticism born from studies I’ve read and from hundreds of experiences with RA patients who report that their doctors label them better than they consider themselves with regard to disease activity.

My rheum docs have always strongly urged me to wait six months before switching to a new Biologic. That’s been true even if I have had negative side effects and no benefits at all. It has been frustrating. At least I have no doubts in my mind about those Biologics. I know for sure they didn’t work for me.

Have you changed Biologics? How many times? How long did you wait? Did you or your doctor make that decision? Or did you make it together?

Answer: Because if it were small, white, and smooth, it would be an aspirin.

63 thoughts on “How Soon Should You Switch Biologics for Rheumatoid Arthritis?”