Recently, we looked at a new report showing machines used to perform musculoskeletal ultrasound (MSUS) vary considerably in ability to detect inflammation, and warning about the use of MSUS in treatment decisions when the machines are not yet accuracy rated. We know that Patient reported outcome measures (PROMs) predict prognosis in Rheumatoid Disease (RD), but they are seldom used.

So how do rheumatologists make decisions about treating RD? Today, we’ll crack open the door to the thinking process that dominates some of them. 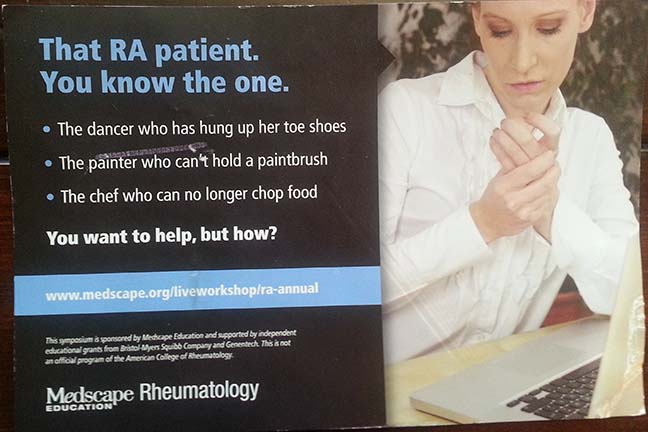 At the close of the ACR meeting last month, four RPF volunteers attended a medical symposium hosted by Medscape / @MedscapeRheum (not an official program of the American College of Rheumatology). The topic of the CME seminar was “Guided by Objective Measures: Challenging Case Scenarios in RA.” Several industry folks also attended, as observers – like us, but most attendees were rheumatologists.

Cases (patients) were described during a presentation from the stage, and then discussed in smaller breakout sessions. We were placed in a group that included a couple of industry representatives and about 20 doctors. Most of what we observed, I’d heard before, either from readers or directly from rheumatologists. But I was glad that the other volunteers could hear first-hand the attitudes of several doctors in a discussion where they earned educational credit.

It’s difficult to summarize 2 hours, but here are some key observations.

1) Four European doctors (from Sweden, I think) seated next to us had a modern treatment approach that included measuring – PROMs and MSUS. Their philosophy seemed to be to get the disease under control as soon as possible, and not allow symptoms to continue to exacerbate. Our facilitator seemed to discount their opinions or restate them to suit his own. Eventually they stopped contributing and talked quietly among themselves.

2) The facilitator didn’t conceal his confidence that doctors always know better than patients. He didn’t say it, but it was almost as if PROMs are a necessary evil that don’t hold much weight. Repeatedly, he led the group to the conclusion that a discrepancy between a doctor’s and a patient’s assessment is resolved by explaining away the patient’s assessment: the patient needs to understand that her disease activity score is a result of something other than the RA (such as bursitis, anemia, or cardiovascular issues).

3) Other opinions were similar to that of our facilitator, and they were reinforced during the seminar. One said he measures patients with a RAPID-3 and a joint count; when the facilitator said, “Wow,” the doctor admitted, “Well, I do that in my head to save time… I’ve been doing this a long time so I can tell…” He had answered the iPad poll that he uses those methods, but in reality, he was still using Gestalt (his subjective opinion). Another doctor was frustrated about patients not agreeing with his assessments and wanted to find ways to convince them that he was right. To him PROMs create more conflict because he believes high scores are a result of confounding issues (that he didn’t see as part of the RD).

Problems that patients describe might be linked to such attitudes

There are over 25,500 comments on this site. The examples below are a small fraction of what could be shown. Many patients of course many have well informed doctors, and hopefully that number will increase.

For years, patients have told us “My doctor says…

“Your ‘inflammation markers’ look good, so what’s the problem?” – example here and here

“If the meds don’t take away the symptoms, it’s fibromyalgia / something else” – example here and here

“It has to be swollen in the office. Pictures / reports don’t matter” – example here and here

If some doctors are trained in these attitudes, what does that mean to patients?

1)  Training must be improved: The fact that doctors were willing to express such dismissiveness in front of others at the symposium shows how confident they are in that viewpoint. Change may be slow because mentors with popular misconceptions or regressive ideas are still training young minds. (See also newly minted Dr. Tylenol and colleague Dr. Shrug.)

What can we do?

1)  Try to find doctors who are trained to use ultrasound and measure disease activity with patient reported outcome measures (questionnaires), and who support shared decision-making.

2)  Go to whatever type of specialist is necessary to get adequate care or treatment.

3)  Support the work of the Rheumatoid Patient Foundation.

Much more to come.

Note: pie chart is an excerpt from a larger survey of patient experiences, in part reported here.