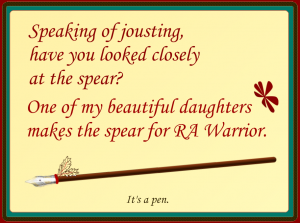 A conversation left me stunned yesterday – until I got my PollyAnna on. Now I see that there is good news and bad news. But, I’ll need to back up a bit.

Like most people, when I was diagnosed with Rheumatoid Arthritis, I was on my own. I had no idea what “typical” symptoms ought to be or how doctors expected me to describe them. Even though my own grandfather had had RA, I was clueless.

First, I explored the internet for stories from other people with RA. Next, I went to medical journals. I printed out piles of pages. Then, I went to the library. I know I have read over a dozen Rheumatoid Arthritis books written by rheumatologists and published by reputable sources. Eventually, I joined a couple of RA forums. And I ultimately started following three RA blogs on Health Central.

I learned a lot. However, I got pretty frustrated too. What I read in the books did not usually match up with the experiences of the patients I encountered. That is when I committed my original sin as a patient.

I started making a mental list of ways that I believed the doctors to be wrong.

I started noticing journal articles which contradicted specific statements of other well-known sources. Testimonials of patients stood starkly against the picture of Rheumatoid Arthritis painted by the medical community. I scratched my head.

Bear with me one more moment and I will tell you what happened to me yesterday. First, let me specifically state a few of my concerns related to defining and diagnosing Rheumatoid Arthritis. All of these erroneous statements were told me by rheumatologists either in a book or to my face or both.

The good news and the bad news

Here is what stunned me yesterday. I had brought some of my questions to the attention of a well-known rheumatologist. His reply was staggering. First, he agreed with me on the merits of every point I made to him. That’s the good news.

However, he repeatedly pointed out that he would not acknowledge that he had ever heard of any rheumatologist anywhere who believed any of the statements which I brought to his attention. He said he does not see a problem. I do not know how to explain that. I have not only read those “facts” in books and heard them directly from rheumatologists, but also had my findings confirmed by daily contact with other patients.

Am I tilting at windmills?

Don Quixote part 1, chapter 4: “I don’t let clouds come before my eyes, for I know where the shoe pinches me.”