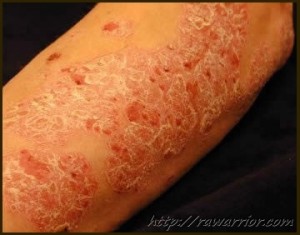 What is Psoriatic Arthritis?

Psoriasis is an autoimmune disease which causes a red, itchy, scaly rash. Most frequently, the rash, called plaque, appears on elbows and knees. Some people with psoriasis also develop symptoms which are similar to Rheumatoid Arthritis. This is classified as a separate disease called Psoriatic Arthritis (PA).

According to the National Psoriasis Foundation, up to 30 percent of people with psoriasis develop Psoriatic Arthritis. I found several other sources which say it is as low as 5%. There are 5 distinct classifications of Psoriatic Arthritis based upon which joints are affected and type of joint destruction involved. Some types of PA cause severe deformity and disability.

Last month, we introduced you to Ankylosing Spondylitis, which is in a branch of the rheumatic disease family called seronegative spondarthropathies. If we call AS a cousin of RA, then Psoriatic Arthritis would be a sibling to Ankylosing Spondylitis. Genetic markers are used rather than apparent symptoms to determine how closely the conditions are related.

Is There a Typical Psoriatic Arthritis?

Eighty-percent of the time, psoriasis symptoms appear first. However, in some patients, the psoriasis is barely even perceptible. Or only the nail tissues may be affected.

Like RA, PA symptoms can vary greatly between patients. Psoriatic Arthritis may be symmetrical or asymmetrical. The spine and sacroiliac joints may or may not be involved. Fingers and toes may swell into a sausage-shaped deformity called dactylitis. A very destructive hand deformity called arthritis mutilans is caused by destruction of joint tissue. (Mutilans can also be caused by Rheumatoid Arthritis.)

How is Psoriatic Arthritis different from Rheumatoid Arthritis?

Personal note: one of my first RA friends does not actually have Rheumatoid Arthritis, but Psoriatic Arthritis. Have you noticed that those of us who have an illness which is part of a family of autoimmune diseases often feel like we are connected to one another in a special way? It is not only the diseases which are similar; we have similar concerns and experiences. I have been ever more grateful for people who “get it”.

Although psoriasis on the elbow and knee may be typical, I knew there are more severe cases. So I found a page with some photos, but be warned: they are a bit shocking. Shocking psoriasis images