Special thanks to Jay Sprinkel for assistance with this post. Although he may be more known for the humor he provides to our Facebook group, Jay is a retired marine biologist who specializes in statistics. He is also a member of the Board of Directors of the new Rheumatoid Patient Foundation.

ACR 20 is part of the vocabulary we learn when we read about RA, along with its siblings ACR 50 and ACR 70. But it’s a bit of a mystery and it may be due for a re-model.

First, how do the ACR 20 criteria work? 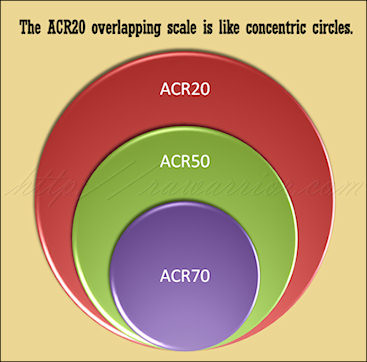 This method is used to describe the response of patients to Rheumatoid Arthritis treatments in Clinical Trials. ACR 20 is viewed as a threshold to show that a drug is better than a placebo or not treating at all.

ACR 20 literally stands for American College of Rheumatology and twenty percent improvement. ACR 20 is a calculation of 20 percent improvement in symptoms of Rheumatoid Arthritis (RA) as defined by the American College of Rheumatology (ACR). “This definition requires response in at least 4 of 6 selected measures. These include a 20% improvement in morning stiffness, erythrocyte sedimentation rate (ESR), joint tenderness score, and joint swelling score and improvement by at least 2 grades on a 5-grade scale (or from grade 2 to grade 1) for patient and physician global assessments of current disease severity.”

Why would something different from ACR 20 be wanted to describe RA treatment response? 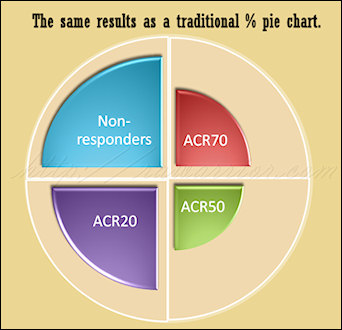 There is also no group called ACR-NR or Non-responders – those who did not obtain at least improvement of 20 percent. We are left to calculate that number, if it’s of interest to us.

Drs. Boers and Kostense wrote in Arthritis and Rheumatism: “Non-Overlapping American College of Rheumatology Response Rates: A Better Way to Report Response in Rheumatoid Arthritis Clinical Trials.” They provide several reasons why it would be better to separate patients into non-overlapping groups according to their initial responses to treatment. “We suggest that treatment response in RA is best described with the use of non overlapping categories. Analyzing these with the appropriate statistical techniques will result in more informative reports of clinical trials.”

Compare my two pictures; these are created as artistic notions of what a new model might look like and aren’t technically representative of any particular result. However, they show how we might be able to compare two models. The pie chart image represents a common way to think of simple percentage divisions: non-overlapping. The concentric circles image illustrates the way ACR20 criteria works today, each level inclusive of patients from the previous level.

With a non-overlapping model, the results look different and they’re easier to grasp 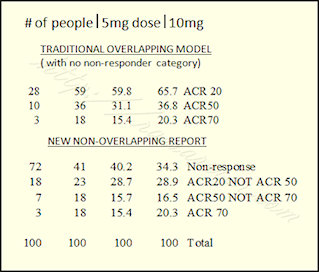 Using the example of a Pfizer tofacitinib trial from a post last March, we can see how the results look different. Look at the bottom half of my chart where it says “New Non-overlapping Report.” The same numbers are used from the same study. These are the actual percentages of patients who obtained the particular results. Using the right-hand column (those who got the 10 mg dose), 34% of people did not respond; 29% reached ACR20 and no higher; 16% reached ACR50, but no higher; and 20% reached ACR70.