Sometimes my #rheum disease and my silly sense of humor get all twisted together into a goofball smoothie. Anyone who’s spent time with me can attest to my devotion to silliness. I’ve been daydreaming about how food ads remind me of RD. I hope you’ll enjoy a little humorous diversion. Laughter makes a great defense when #rheum pain is on offense. (As if RD could ever be inoffensive.)

Who would believe Rheumatoid Disease is this big?

In 2009, I wrote about trying to never complain about unrelenting RA that affects every joint and causes other problems: “If I were to do that, complaining would fill my days. And if I did complain, who could believe there is this much RA?” Still, I rarely talk about what it feels like to live with this monster for that very reason: Who could believe it’s this much? 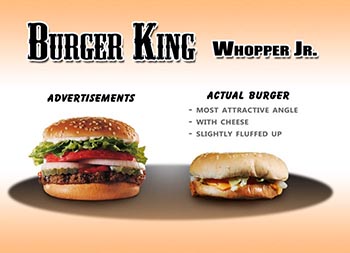 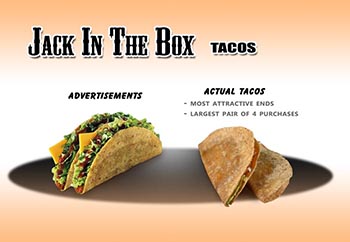 Not exactly as advertised 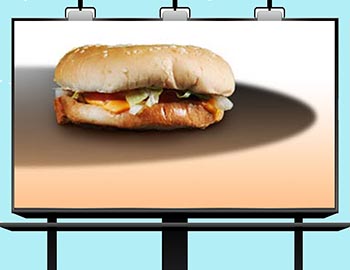 Actual food tends to be smaller than advertised food. And yes, I Googled that.

When I found comparison photos on the Alphaila blog last week, I laughed out loud and called others to come see. Have you ever bought a taco or hamburger that looked that sad? We laughed because it was so true. I told DJ they could never put that real hamburger on a billboard… but I did – in Photoshop.

Larger than anyone could believe

Rheumatoid Disease (RD), on the other hand, is much more than it’s advertised to be. We’re commonly told it’s “a type of arthritis.” Just today a reader sent me a familiar example of the “false advertising” about RD in Reader’s Digest, defining it as “an inflammatory disease that affects small joints in the hands and feet.” 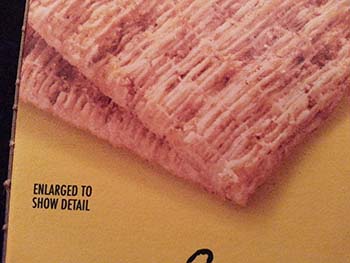 The craziest thing is that when people actually living with Rheumatoid Disease (PRD) tell about what it’s really like, they’re sometimes suspected of hypochondria, or a pain processing problem, or what one patient said today “somatoform disorder.”

Do you see what’s printed on this Triscuit box: “ENLARGED TO SHOW DETAIL”? Maybe that’s what RAW does – enlarge the details about Rheumatoid Disease so that the world can see the truth.

Rheumatoid Awareness Day is a week away!

Much of what people assume about PRD depends upon what they know about the disease – or what they don’t know. Rheumatoid Awareness Day – February 2 is finally an opportunity to get the truth out about RD. Click here for updates about awareness day events sponsored by the Rheumatoid Patient Foundation (RPF). Or plan your own event for Sunday February 2 – cut some indigo ribbon and pin it to your jersey. And post a picture on the Facebook Rheumatoid Awareness Day event page.

And, click here to read about how you can double your gift to RPF in honor of Rheumatoid Awareness Day. A gift of any size, such as a dollar for every year you or a loved one has been diagnosed, would be matched thanks to a grant from Crescendo Bioscience.