Researchers found that steroids applied directly joint tissues had a specific affect on disease activity that methotrexate did not have. Glucocorticoids (dexamethasone) decreased citrullination and PAD (peptidylarginine deiminase, an enzyme commonly produced in RA inflammation) expression.

“The inflamed RA synovium is characterized by high expression of intracellular CP (citrullinated proteins) and PAD4 enzyme that is reversed through GC (glucocorticoids), but not MTX treatment. Further investigation of the exact mechanism of action and comparison with other anti rheumatic drugs is warranted.”

Researchers showed that citrullination and PAD expression in the synovium are dependent on local inflammation and can be targeted by glucocorticoids. The language is technical, but scroll through the pictures. Slides show the presence of the citrullinated proteins or the PAD enzymes and how they are changed or not by treatments.

See also, a related editorial Inhibiting citrullination in rheumatoid arthritis: taking fuel from the fire, with fascinating comments about the origins of Rheumatoid disease activity. 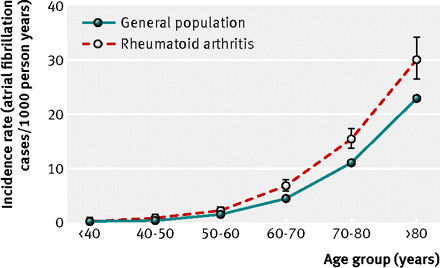 2. Atrial fibrillation and stroke risk are both increased in Rheumatoid disease

A new Danish study reports a “novel finding of increased risk of atrial fibrillation in rheumatoid arthritis.” The study of more than 18,000 Rheumatoid Arthritis patients found an increase of 40% in atrial fibrillation risk and an increase of 30% of stroke risk. Researchers conclude that the arrhythmia should be considered a significant part of cardiovascular risk assessment of these patients.

Researchers determined that the reliability of self-performed joint counts for patients in remission was high when compared to “independent objective assessment” for swelling and tenderness. They found higher agreement with larger joints than smaller joints. “Self-performed joint counts are particularly useful for monitoring in patients having attained remission, as these patients seem able to detect state of remission.”

According to the study, “a close and accurate assessment of disease activity is time consuming” and the shortage of clinicians means they may need to identify “candidates for reductions in outpatient contacts.” They note that several previous studies showing the value of patient-derived joint counts in RA “were controversial, partly concluding that patient derived joint counts are simply not accurate enough.” However, this is the first study to separate patients in remission from other patients for the purpose of self-derived joint counts.

Postblog: There are other critical concerns related to assumptions in this last study.  Most people with RA do not have disease activity measured by joint counts or HAQ assessment or anything else on a regular basis. Remission of RA disease is defined in several ways and studies show 96% of patients judged to be in clinical remission still experience damaging disease activity which is not visible to the naked eye, but can be apparent with the use of ultrasound or MRI.