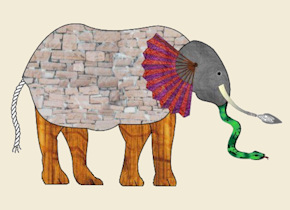 My mom used to read to me John Godfrey Saxe’s 19th century version of a famous Indian legend, The Blind Men and the Elephant. I’m certain it contributed to my zealous love of evidence. Over the last couple of years, interacting with thousands of people with Rheumatoid disease, I came to the conclusion that only certain parts of this elephant were perceptible to those who define and treat the disease. Then, interacting with researchers, I saw that other parts of it are being identified behind the scenes. Today, I can bring you a glimpse of what we’ve witnessed. 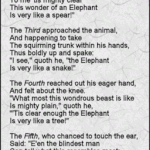 Bruce Jancin, staff writer for Rheumatology News wrote about one part of that Thursday in Airways Abnormalities May Represent Preclinical Rheumatoid Arthritis.

“Increasing evidence suggests that RA is smoldering in the lungs during this preclinical stage, which can last a decade or more. Indeed, bronchiole-associated lymphoid tissue may actually be the site where tolerance is broken and RA-related autoimmunity and systemic inflammation are generated, according to Dr. William F.C. Rigby, professor of medicine and professor of microbiology and immunology at Dartmouth Medical School, Hanover, N.H…

“‘If methotrexate can be used to prevent the vascular complications of atherosclerosis, why can’t we use it to prevent RA? There is now [a National Institutes of Health] clinical trial proposing this. Because once the joint gets targeted, damage can happen very, very quickly. Many people have erosions on x-ray after only weeks of symptoms,’ the rheumatologist observed.

“He credited the discovery of the existence of a lengthy preclinical seropositive phase of RA to landmark studies involving U.S. military personnel with centrally stored blood samples that were available for many years prior to their being diagnosed with RA (Ann. Rheum. Dis. 2008;67:801-7). The existence of this years-long preclinical lag time has since been confirmed in multiple other populations.” (Emphases added.)

Preclinical RA in research and the real world

One week ago in Houston I had lunch with a patient from Denver explaining that close to her home investigators are studying preclinical RA by locating people with positive antibodies who do not yet have joint symptoms. Families like these want to know whether relatives (twins in this case!) will be affected.  I described the strategy to observe what happens with RA before joints are affected. Four days later, we read the RN article.

The Colorado researchers have been screening and conducting interviews with first-degree relatives of RA patients and obtaining blood samples at community health fairs during the past few years learning to identify early RA and preclinical RA. According to Jancin, the earlier Armed Forces study demonstrated that the serologic profile method (anti-CCP and/or two or more rheumatoid factor isotopes) is 96% reliable for identifying RA before inflammatory arthritis is evident. We’ve examined possible triggers to Rheumatoid disease and you can see the advantage of being able to follow people who do not yet have diagnosable RA symptoms.

CT scans showed 77% of 45 preclinical RA patients experienced a form of airway disease. Only 31% of the antibody negative control group showed airway abnormality, but 12 people with early RA (diagnosed less than one year) were similar to the antibody positive pre-RA group.

Significantly, “none of the seropositive preclinical RA subjects with CT lung abnormalities had any evidence of synovitis of their joints on MRI, indicating that RA isn’t smoldering preclinically in their joints for a long time prior to the time they show up in a rheumatologist’s office with joint symptoms.” In order to determine where RA disease begins and how to arrest it, we must look outside the joints as these researchers are. “These findings suggest that the lung may be an early site of autoimmune-related injury, and potentially a site of generation of RA-related autoimmunity. Further studies are needed to define the mechanistic role of lung inflammation in the development of RA” (from abstract for Airways abnormalities and rheumatoid arthritis-related autoantibodies in subjects without arthritis: Early injury or initiating site of autoimmunity?)

Postblog: We’ve known that joints are where Rheumatoid disease ends up, but not likely where the disease begins. My unique vantage point, listening to the voices of so many people with this disease, has compelled me to advocate for research and treatment which considers the entire disease. We have yet to find the sine qua non of Rheumatoid disease. But the future is rapidly arriving when we’ll look at this elephant with our eyes wide open. Or at least each blind man’s voice will be heard.

57 thoughts on “Preclinical Rheumatoid Disease: There Are No Joints in the Lungs”