Commercials for Biologics like Enbrel and Humira have come a long way in the last two years. Could our perspective be having an impact on marketers?

I don’t know. But the new Abbott ads are remarkable compared to the old baloney.

As we watch a piano or a bicycle crumble to pieces, we hear, “As you know, RA means pain. But you may not know it can also mean destruction—not just of your joints, but of the things you love to do. The longer you live with the aching, stiffness, and swelling, the closer you may be to having your favorite things taken away. To help you talk with your doctor about the signs and symptoms of rheumatoid arthritis—and joint destruction, sign up for your free Personal Joint Profile.”

No, it doesn’t make me want to go to their site. But that’s only because I know where the best RA info is. Wink. I’ll be surprised if these Abbott ads aren’t very effective. 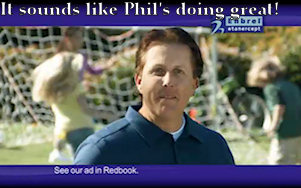 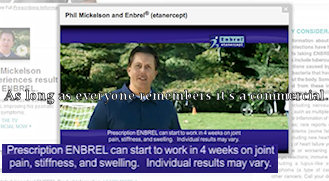 The Enbrel message was even sunnier than that of Punxsutawney’s Phil. Phil Mickelson seemed to predict a rosy future for those with inflammatory arthritis diseases. As Katie Beth said when we saw the ad this week, “Momma, it’s a commercial for a product. It makes it sound good.” Where’d she learn to talk like that?

Phil didn’t do so well at the Master’s, but his Enbrel commercial got a lot of attention during the Tournament. 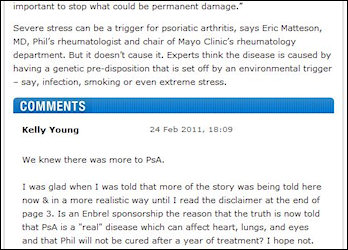 Some said how glad they are that Phil is now discussing publicly that he has Psoriatic Arthritis (PsA). That’s fine, as long as they understand that this is a commercial for Enbrel.

For a more realistic message, click here to watch my Walking a Big Dog RA Commercial, sponsored by Me.