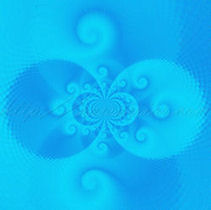 If I cited a percentage of patients who get a cough from Orencia, then I’d quote a source – probably a clinical trial. However, if I merely say, as a patient, that Orencia gave me a cough, then that is a firsthand experience and that’s another type of credible source for other patients.

Coughing up the truth about Orencia side effects

About a year and a half ago, when I finally found a rheum doc smart enough to recognize

I was glad to start Orencia infusions. The consummate optimist, I held an infusion party, eager to finally know what it’s like to have an RA treatment that does something. The Orencia loading dose requires the first three infusions two weeks apart, but I had to postpone some due to a wicked cough. It didn’t seem safe.

I decided to skip a couple of weeks of methotrexate too when the cough would not relent. Eventually, the cough improved. I got more Orencia. I coughed.

It was a hard, productive cough. Every morning, I’d cough for an hour straight, unable to talk or eat. I remember Tweeting many days: Still coughing. It started to scare me.

Whenever I shopped, I bought another large bottle of cough syrup. I stayed on it all the time. I complained at every doctor appointment for the next 5 months and it was noted in my chart. Finally, Doc said, “Coughing is a rare side effect they saw in trials with Orencia. I’ve been thinking all along your coughing is a side effect.”

By this time, I was sure of it already. And Doc finally admitted it. Doc scheduled one more Orencia infusion anyway so that I could complete my obligatory 6 months to be certain that the treatment had no benefit to my RA. I bought more cough syrup.

That story happened to me. That’s why I loved that Tweet from Kelly Kunik during last night’s Twitter HCSM (Healthcare communications social media) discussion. A doctor had questioned whether e-patient bloggers are credible sources.

He argued that patients create “echo chambers” and get information from Wikipedia, which is unreliable. I Tweeted that none of the e-patients I know use Wikipedia as a source for healthcare information. Let’s just say he didn’t agree.

You know what?  In two years, I don’t ever remember a fellow warrior sending me a Wikipedia link on my blog, Facebook, Twitter, or email. Out of THOUSANDS of links! The e-patients I know are reading the daily news, subscribing to email alerts, and doing searches using resources like NIH, Medscape, Johns Hopkins, RxList, and journal abstracts. They don’t post links from About.com or Wikipedia. That’s just my experience.

Can anecdotal evidence be a reliable source?

Another Tweet I loved last night was by Diabetes blogger Kerri Sparling: @Mary_Pat_Whaley @MedMarketingCOE EXACTLY. We appreciate the facts. We also need the anecdotal information. #hcsm 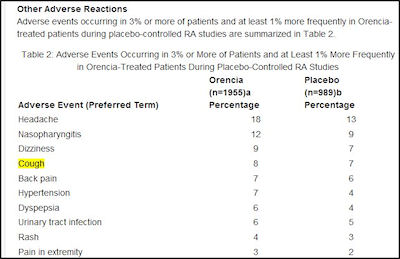 Several people have sent me an email or posted on my Facebook page that they are taking Orencia and have a persistent cough. They’re wondering whether it’s a side effect. They weren’t warned by their doctors either. It’s been bugging me for a while. Why won’t their doctors tell them what I feel compelled to? “Yes, the cough might be from the Orencia. Keep an eye on it and let your docs know.”

One dear lady I know has asthma and a history of smoking. She was on Orencia until recently. Her breathing problems were exacerbated. I worried about her and I started to wonder: Why are they giving this medicine to people who have breathing problems already if coughing is a possible side effect? About that time, COPD warnings were added to the Orencia TV ad that runs here. So patients who watch TV will know. I hope the rheum docs are watching TV.

So how many patients do get a cough from Orencia?

Far down on Drugs.com Orencia side effects page in the For the Professional section in a sub-section on adverse events, a chart shows 8% of patients reported cough from Orencia in a clinical trial. The reason that doesn’t stand out to many docs may be that 7% of patients on placebo reported cough.

Funny who uses Wikipedia as a health information source

True story. You remember the GP who said all those stupid things about RA when my doc was out of town? He also spent 15 minutes trying to convince me that I’m wrong about the thyroid disease I’ve had for over 30 years. He used Wikipedia on his laptop as his source. He actually pointed to the screen and said, “It says right here on Wikipedia…” (I was not seeing him for either issue and I kept referring him to my rheumatologist and my endocrinologist.)

You may want to read an impassioned reply I wrote this weekend responding to Dr. Howard Luks in a Quora discussion: “Should the empowered patient be considered an expert in their own disease?”

Why evidence of side effects may be underreported in clinical trials.

More on the topic of evidence and side effects!