The Galveston Daily News reported last week a Port Bolivar, Texas woman with Rheumatoid Arthritis died of an infection of flesh-eating bacteria. The bacteria, which are common in warm salt water worldwide, can cause necrotizing fasciitis. Ginger Ling, 57, had cleaned and cooked seafood the day before being hospitalized. She had been diagnosed with RA two years earlier.

Officials believe the infection was likely caused by a bacterium called Vibrio which can be contracted by eating raw or undercooked shellfish. According to officials, Vibrio can be treated if caught early. Ling was treated with antibiotics.

“’Certain folks are more susceptible to experiencing problems with it,’ Koopmann said. ‘Those with a compromised immune system, liver disease, diabetes, cancer, any kind of medical treatment that could weaken the immune system.’ Tammy Bage said her mother was a lifelong resident of Port Bolivar and loved seafood. She took steroids since 2008 for rheumatoid arthritis, which had her wheelchair bound, Bage said.” 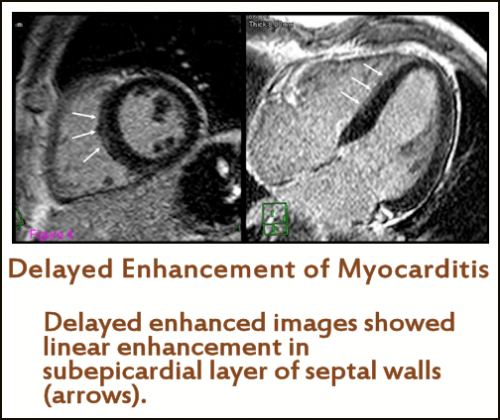 A pilot study looked for ways to eventually predict cardiovascular events in RA patients. Many RA patients die earlier due to the effects of the disease on the heart. Often there are no typical signs of cardiovascular disease (CVD) in people with RA. The CVD of RA does not occur for the same reasons (high blood pressure, tobacco, high cholesterol, stress, excessive alcohol, and obesity) as in non-RA patients and it’s not as easily detected.

There were exciting findings. Abnormalities were indeed found using the cMRI in RA patients who had not had cardiac symptoms: “Myocardial abnormalities, as detected by cMRI, were frequent in RA patients without known cardiac disease. Abnormal cMRI findings were associated with higher RA disease activity, suggesting a role for inflammation in the pathogenesis of myocardial involvement in RA.”

The Arthritis Research and Therapy pdf contains details of the study, charts, references, and images of the cMRI’s.

Kathryn sent in a fascinating news article fromScience Daily about disc disease. Many of us diagnosed with RA also suffer from degenerated discs. Recent theories about Fibromyalgia syndrome also point to degenerated discs as a source of pain. Look at what researchers found: “Herniated discs occur when the tough outer layer of cartilage cracks, allowing pieces of the softer inner material to protrude into the spinal canal. Until recently, it was thought that pain occurs when the material touches a nerve. Now doctors believe the pain is the result of an immune response caused by the presence of inflammatory cells.”

New information about what causes pain means a lot if you have been told that pain does not have a “real” cause. What if science catches up to pain? What if “inflammatory cells,” of which RA patients have vast amounts, are still being uncovered? Whenever an organic cause can be found, pain may be more treatable.

“The finding implicates the cytokine molecule interleukin-17, and supports the burgeoning theory that an immune response plays a significant role in disc disease, says William J. Richardson, MD, an orthopedic surgeon at Duke. It may also open the door for new, therapeutic approaches that target a specific immune response in hopes of halting disc destruction, and possibly reversing the disease process… By identifying the specific subpopulation of lymphocytes (immune cells that are excited into action by the cytokine), it may soon be possible to arrest the body’s inflammatory response to disc cells,’ says Richardson, senior author of the research published online in the July issue of Arthritis and Rheumatism. Doing so could reduce the painful inflammation associated with degenerative disc disease, and halt the evolution of arthritis. It may also reduce the need for back surgery.”

I hope you enjoyed this peek into current events with RA news. I’ll try to do another one soon. If you find a news item which you think is particularly juicy, you can email me the link at Kelly @www.rawarrior.com. Don’t be surprised if it I can’t reply every submission. I do try.