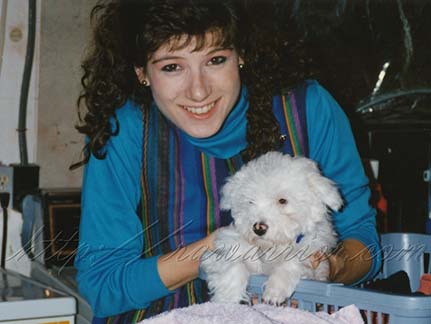 The story of my angel Gabriel 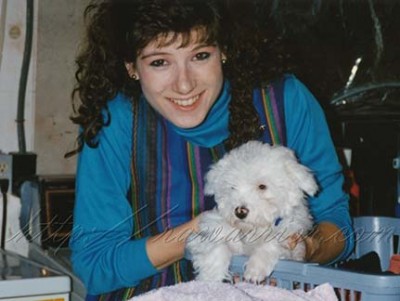 One year ago today, we lost our dog Gabriel. Had he made it through last summer, he would have been 19 years old. I bought him on New Years’ day with Christmas money. I was 7 months pregnant with my firstborn. I always told Gabe he was my “first adopted”.

Gabriel was a Bichon Frise. Even though he was a purebred, I purchased him for only one hundred dollars. There were two reasons that he was such a “cheap” puppy.

First, he had little freckles on his nose and foot pads. These coloring “imperfections” made him too flawed to either show or breed. He fit in perfectly around here – we aren’t show offs either.

The second reason I got such a deal was that I traveled out into the country to find him. Gabe was born on a farm an hour outside of town. It was a funny scene when we found him. There were seven tiny white balls of fluff bouncing around like ping pong balls in this dull sitting room. It was a blur of fur. He was the one that I caught.

Over the years, I spent hundreds of hours grooming Gaber. I quickly discovered that professional grooming is very expensive for Bichons, so I learned how to do it myself. That is how I use to always handle everything – just tackle it by myself. I got a book from the library. And Gabriel and I figured it out.

He was gorgeous and tried to cooperate with me. His favorite part was running around after a haircut listening to us say how handsome he looked. He posed for lots of pictures. Even family portraits.

Gabe had a lot of unusual qualities. 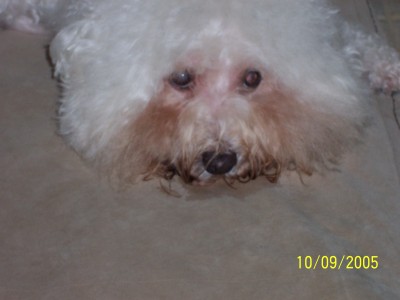 He loved visitors so much that he often threatened to go home with them. We had prayed he would always make visitors feel welcome. He certainly did.

One of Gabe’s funniest tricks was to bounce straight up like a basketball in front of the window in our front door. The window was four feet off the ground. It was so funny to see the reaction of people when they rang the doorbell. Within seconds, they were face to face with Gabe. Not what they expected. And then he was gone. And then he was back. Up and down…

Eventually, his bouncing days ended. But he found other ways to express his ebullient personality. He helped me raise four of my children. It was obvious that he saw himself as one of the parents, not one of the kids. Firstborns are like that—even when they are adopted.

We grew old together overnight.

During the last years we had Gabriel, he developed arthritis all over the place.  I became unable to care for him and he became unable to do the things that showed people how cheerful and funny he was. Neither of us gave up though.

When his hair got so long he could not see out, I would painstakingly groom him. He would patiently stand still. It might take hours. He was my angel. I used to sing to him the song by Sonny and Cher, I Got You Babe. But, of course it went like this: I Got You, GABE.

I miss my Gabriel today. I think of him when I get in bed each night and my hips and shoulders pull out of place the same way that his did. I think of him whenever I hear the songs I sang to him every day. And I know better now than I did 20 years ago: he definitely was a first quality dog.