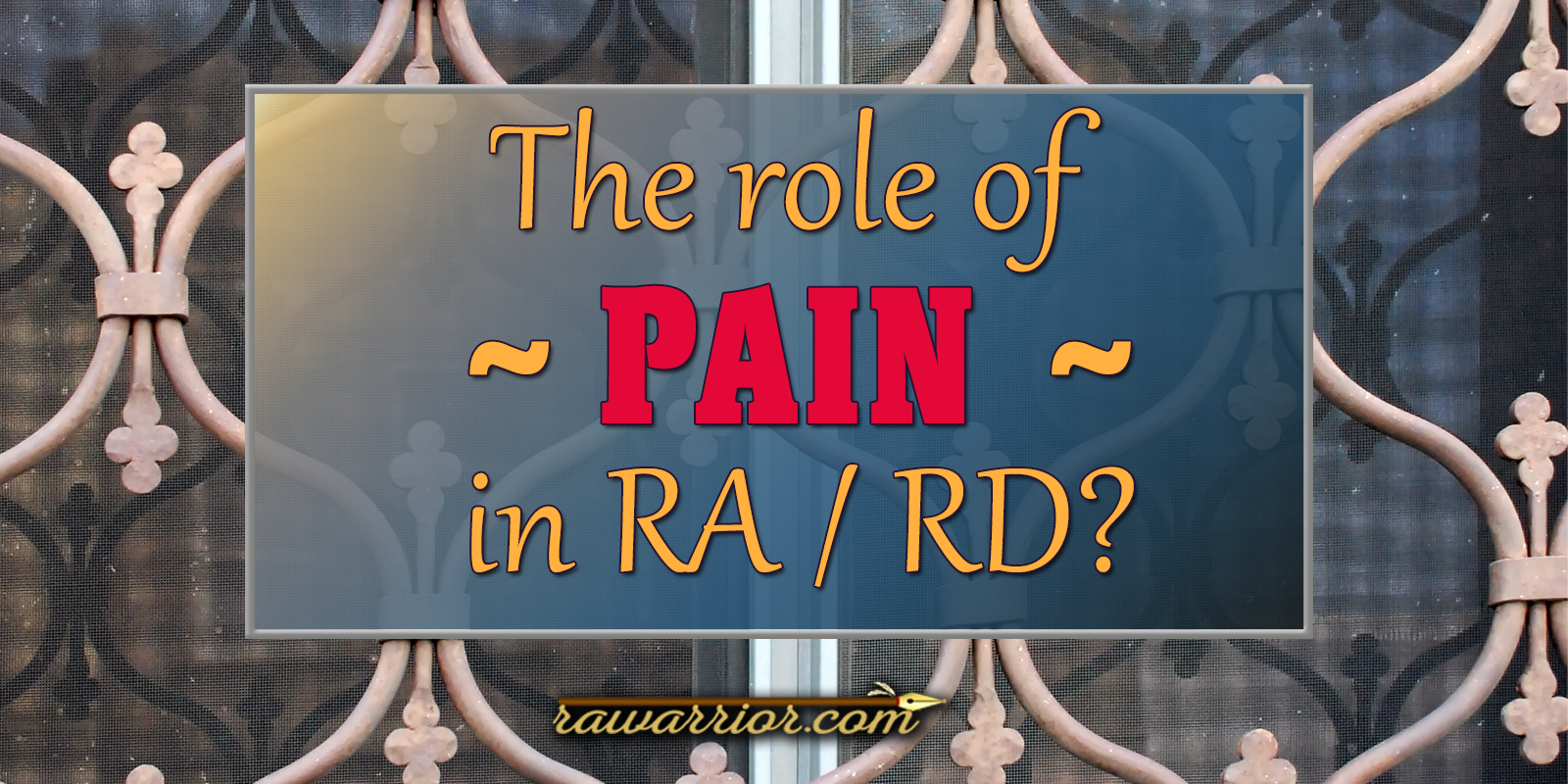 This is Part 1 in a series on the role of pain in rheumatoid arthritis / disease. What role does pain play in RA diagnosis? In disease assessment? In disease treatment? Let’s start with a history lesson…

In 2009, we discussed the need to both treat rheumatoid disease and manage its symptoms. Modern disease treatments may suppress the disease for some people, but there are usually remaining symptoms that we called “leftovers.” So, we made a distinction between two kinds of medications: disease treatments and symptom-treating medicines. 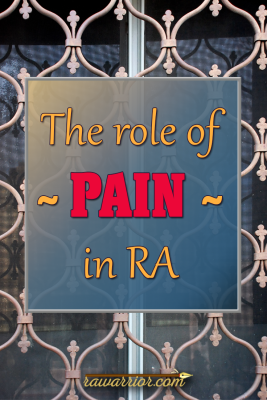 Once upon a time, symptoms like pain were always treated – because they were the only things we could treat. Doctors used the Treatment Pyramid to slowly progress to more aggressive treatments for Rheumatoid Arthritis / Rheumatoid Disease. They started with anti-inflammatories like ibuprofen or aspirin to treat symptoms. Next, they moved on to prescribing steroids like cortisone shots or prednisone. Eventually, when symptoms worsened, doctors recommended more aggressive treatments such as DMARDs (disease modifying anti-rheumatic drugs like gold, Plaquenil, or methotrexate).

Back then, people with rheumatoid disease (PRD) used symptom treatments when needed, however effective they were. However, most PRD were not prescribed DMARDs, especially early in the disease process. But that changed with the advent of new medicines and newer Treat to Target models.

From the CDC’s condemnation of the use of pain medications (opioids) with so-called “chronic” pain to the cautions on NSAIDs like ibuprofen to warnings of steroid over-prescription, symptom medicines have come under fire in recent years in rheumatology. It has been a very convenient argument as costly Biologic DMARDs have gained favor. Many modern rheumatologists are trained to withhold steroids at all costs. But meanwhile, some elite clinical studies in Sweden and the Netherlands use steroid injections in conjunction with DMARDs to quell any inflammation and achieve “remission.”

The meaning of pain in Rheumatoid Arthritis

Pain is often the first sign to a patient that something is wrong. With injury, pain is meaningful; it tells you things like: “Take your hand away from that burner. Get some ice.” But pain without a harmful event is actually a signal of something worse. People with severe or long term RD learn to “ignore” pain because they have so much of it. By the time they see a doctor for diagnosis, pain is usually accompanied by other symptoms that are more detectable. Clinicians tend to rely on other symptoms (like swelling) because they cannot “see” pain, especially in a PRD with a high pain tolerance. When clinicians try to measure disease activity, pain is emphasized less than easier to evaluate blood tests. Still, pain will always be a sign to PRD and those who live them.

Click here to read discussions on hypochondria in RA / RD

What is Remaining Pain in Rheumatoid Arthritis / Disease?

“Remaining pain” is a current term for joint pain PRD experience despite treatment with DMARDs like methotrexate. This term is used whether or not other symptoms such as swelling remain. Remaining pain studies suggest that the role of pain in Rheumatoid Arthritis / Disease is not as clear as it once was. Stay tuned for a discussion of a popular study on remaining pain in Rheumatoid Arthritis / Disease. Don’t miss any of this fascinating discussion.

Let’s hear what you have to say.

HAVE OTHERS DOUBTED HOW MUCH RA / RD HURTS?

WHAT ROLE DOES PAIN PLAY?

WHAT IS YOUR EXPERIENCE WITH REMAINING PAIN?

25 thoughts on “The Role of Pain in Rheumatoid Arthritis”