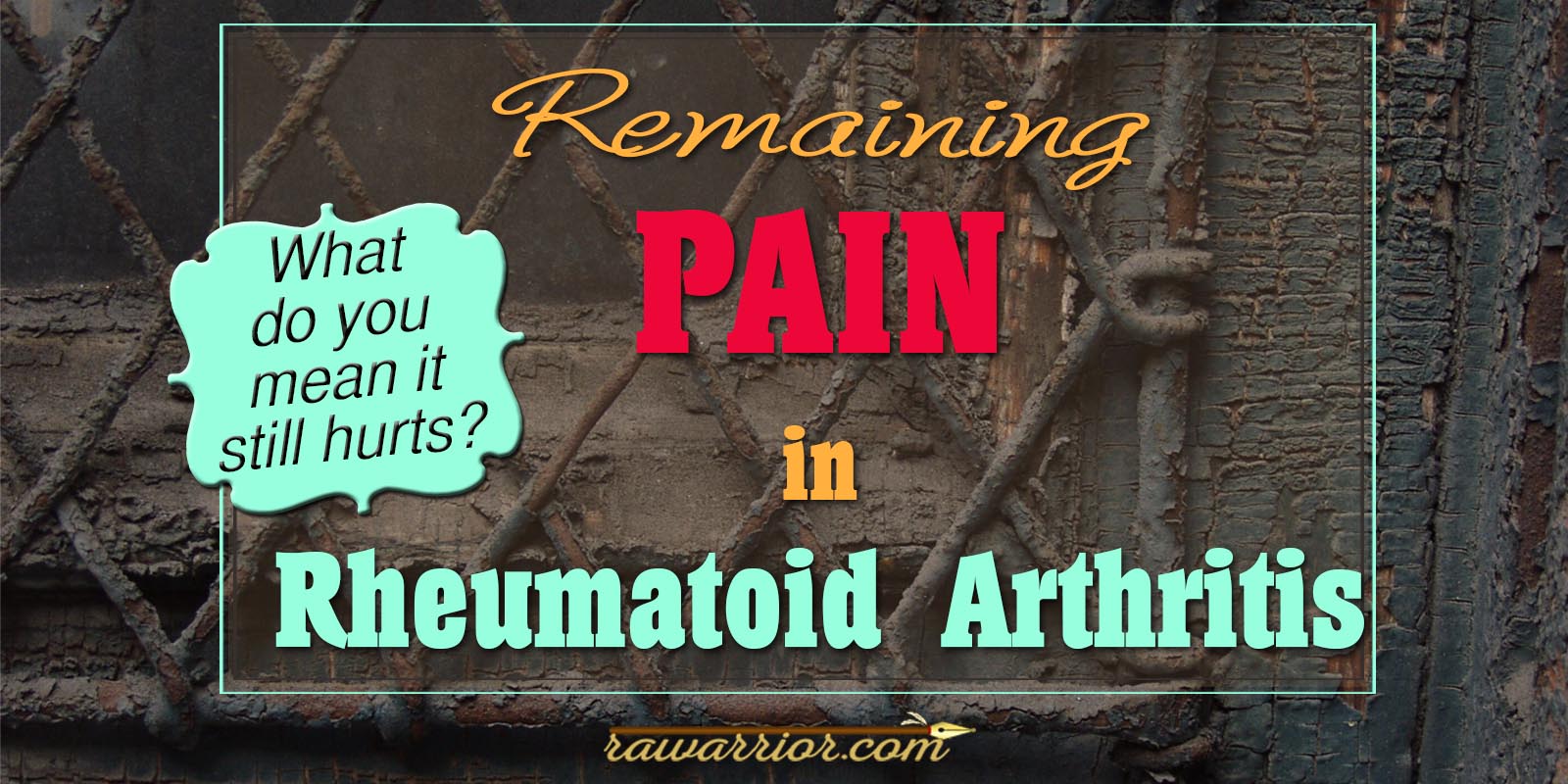 In part one of this series on the role of pain in rheumatoid arthritis / disease, we learned that “Remaining pain” is a term for joint pain that patients experience despite treatment with DMARDs like methotrexate or Enbrel.

First, why do we care about a study on Remaining Pain?

Beliefs about “Remaining Pain” are fundamental to treating and curing RD. It is crucial that patients, investigators and clinicians have a proper understanding of rheumatoid disease activity and its response to treatment. Here are three reasons.

1) People with rheumatoid disease (PRD) can receive poor care: When doctors do not recognize that disease activity is causing remaining pain, they may respond incorrectly. As a result, PRD may be treated dismissively or receive the wrong drugs for uncontrolled RD.

3) Focus on incorrect theories can delay or derail research for better treatments or a cure.

Questions about the Remaining Pain study

The authors state that they specifically use CRP to assess inflammation and disease activity because CRP is “independent of pain.” In fact they say “CRP levels did not correlate with levels of pain or patient’s global assessment” (PGA). This disconnect is actually the most common cause of patient – physician discordance: The doctor looks at a blood test (CRP or ESR) from a single day, while a patient considers all of the painful and disabling symptoms experienced day by day.

The authors claim CRP is an “objective marker” to detect inflammation. But CRP is insufficient for that. If CRP alone is sufficient to detect disease activity / inflammation, what is the purpose of the many disease activity measurement tools? Of musculoskeletal ultrasound (MSUS)? Of numerous other blood tests commonly used in RD? Or of novel markers such as 14-3-3-eta? Or composite tests such as the Vectra DA? If a CRP were a foolproof test for inflammation, why even have joint examinations?

Remaining Pain concerns the majority of people with RD

However, the study found most patients have Remaining Pain. “Moreover, remaining pain was present in one-third of patients with a good EULAR response to therapy and in two-thirds of patients with moderate or no response.” A majority had Remaining Pain, including a third of those with a so-called “good response.” The majority of people with rheumatoid disease (PRD) treated with only methotrexate have remaining pain. The authors also quote surveys showing two-thirds of PRD are unhappy with how their pain is managed. Note well that this discussion concerns the majority of us.

THE KEY QUESTIONS ARE

The study authors offer a few explanations, none of them adequate. They give nod to terms such as “maladaptive pain coping,” “fibromyalgia-like disease,” and “dysregulated pain thresholds, hyperalgesia and allodynia.” They don’t offer much hope for what they call “treatment-resistant pain conditions.”

In a moment, I’ll share why I know they’re wrong. And what can be done to help PRD. But first, note how similar their suggestions are to previously debunked explanations of rheumatoid pain, below. These would be great to catch up on or reread when you can.

12 Reasons these stale theories on Remaining Pain are still wrong

At one point the study authors question whether Remaining Pain could actually be “sub-clinical inflammation” from RD that’s continuing to simmer. (Yes?) No, they hastily dismiss this idea due to low CRP and low swollen joint counts in the “responders.” Here’s why they are wrong:

EXECUTIVE SUMMARY
It’s important to understand what Remaining Pain means. Current methods are flawed. Most of us have Remaining Pain. Numerous scientific and logical details show it’s wrong to assume most Remaining Pain is not actually disease activity.

WHAT IS YOUR EXPERIENCE WITH REMAINING PAIN?

DOES TREATMENT REMOVE ALL PAIN FROM RD?

Stay tuned for PART 3 where you’ll learn why “Remaining Pain” is a useless term. We’ll see how science may unravel this misleading concept. And we’ll consider what is best for people living with rheumatoid disease.