Severe Rheumatoid Arthritis can get you stuck. 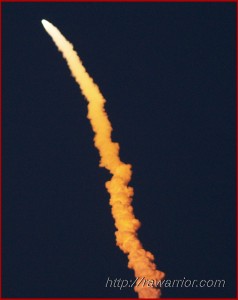 We who live on the Space Coast follow the Space Shuttle like most towns follow their local high school football team. When there’s a launch, people run out into the yard, climb up on their roofs, and cheer like it’s July 4th. What are fireworks compared to a giant rocket launch?

A large portion of the jobs here relate somehow to NASA or the facility at Cape Canaveral, which makes it feel even more like we are a part of that family. At my house, we even pray for the Nasa-nauts to be safe as they take off, de-orbit, or space walk. (Nasa-naut is the word my son taught us for astronaut when he was 2 years old.)

Well, Florida is awash right now; this is our sixth straight day of constant downpour. Roads flooded out, etc. So, of course, shuttle Atlantis scrubbed its landing this morning. No big deal, right? They can try to come down again tomorrow. And after that, there’s always Edwards Air Force Base in California.

Still, there is a sense of apprehension when the local space reporter describes the ways in which the Nasa-nauts have had to reduce power usage. They have to conserve power – just in case. They began to save energy a couple of days ago when NASA saw the weather report: rain in Florida with no end in sight and a few storms at Edwards, too.

Conserve energy, I smiled to myself.

Wow, the Nasa-nauts and I have something in common. I constantly have to worry about whether I will make it home. I’m not usually in orbit, mind you. But I do live about an hour from most shopping or doctor’s appointments. I get myself out there (Orlando or Melbourne, usually) and then it’s all about how I will make it back.

However, severe Rheumatoid Arthritis broke my fuel gauge a few years back. I read about it once in medical journal. No, they didn’t call it a gas gauge. But, doctors say that when you have RA, you are supposed to pace yourself carefully because you can no longer accurately judge how much strength you have remaining at any given time. It can be completely gone quite suddenly.

It’s like this: the fuel gauge reads ½ a tank. Two miles later, you look down and you’re approaching “E.” Then, you’d better get back quickly or you’ll be stranded in orbit.

Alas, physical energy must be conserved, but the engine inside the soul revs up just the same. Every day, I hear people with RA talk about the frustration of these restrictions and limitations. If physical energy remains limited, maybe we can become limitless at something else – like compassion or patience or joy.

We’ll learn new ways to express that powerful energetic enthusiasm of ours. And that way, when others are flooded out or stuck in orbit, we will still be soaring.