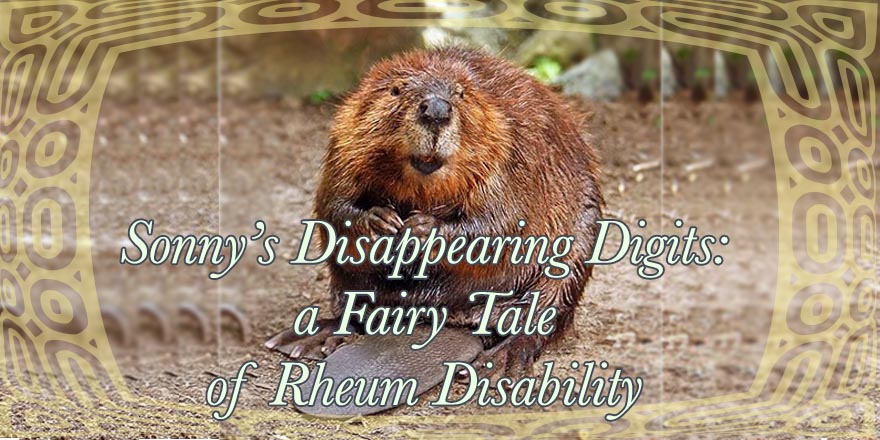 A few weeks ago in the car, Roo and I were talking about how hard it is to explain and understand rheumatoid disease (RD) and rheum disability. Roo is alone among my five children in that he has no memory of the strong, healthy woman I was before full-blown RD onset when he was 6 months old. I made up this story to help him have some perspective on rheum disability. 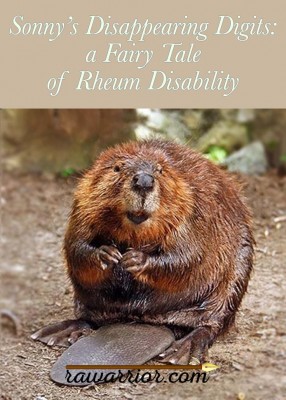 Once upon a time there was a busy beaver named Sonny. Sonny had 7 little beavers at home to feed. So Sonny worked very hard at the Big Dam Project at the Wide River Bend.

One morning Sonny woke up missing a digit from one of his front paws. “This is alarming,” Sonny said, “but one mustn’t be late for work!” and Sonny hurried down the road. It was harder work that day with a partly incapacitated paw. “But, there are harder things in life than this,” thought Sonny, working hard.

Another morning soon after that one, Sonny awoke with another missing digit from the same paw! “This is concerning,” thought Sonny, “I hope this is not a trend.” And Sonny scurried off to work. Work went slower than before, and the manager noticed. “Sonny, don’t slack off, now. You know this project must stay on schedule.”

A couple of days later, Sonny awoke to find with great shock that he was now missing a digit on his other front paw! Management was not pleased when Sonny worked overtime to get the same amount of work done.

Sonny’s friends and family took the losses in stride: “It’s just something Sonny’s going through.” They didn’t seem to notice Sonny’s restrained fear that this trend might continue.

The next Monday morning, Sonny was less shocked to find that another paw was missing a digit. This time however, Sonny had lost a toe from a back paw, so scurrying down the road to the Big Dam Project went a little slower. The manager noted, “You’re late Sonny. Don’t let that become a habit.”

Work was more difficult with each loss, but Sonny did not quit. There were young beavers to provide for at home. There was also pride in working hard and being part of something important like the Big Dam Project. 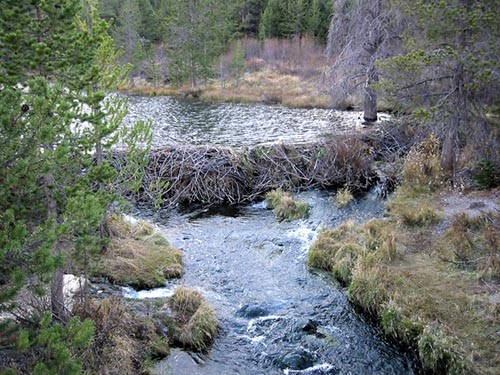 Over the next few weeks, more of Sonny’s digits were mysteriously missing. Sonny did not know where to turn, but continued to beaver-on to get the work done. No one seemed to know the cause or how to help. There were rumors of something similar happening to one of Sonny’s great aunts. So maybe it was an old family curse, some whispered. Others supposed Sonny had gotten into some rotten wood.

Only two things were certain.

One, it took more time to do less work and Sonny struggled more with each loss.

And two, no one else seemed to realize how wide the gap had grown between Sonny’s capacity to get things done and his obligations. Sonny’s manager expected the same amount of work whether or not Sonny limped and dropped things. It bothered Sonny to know that no one understood how hard it was, and Sonny felt alone.

Sonny’s mother had always said it was important not to judge other beavers since it’s impossible to know what other beavers have endured. The disappearing digits impressed this lesson on Sonny’s soul. No one could grasp what was happening to Sonny, and they should not assume they did. But Sonny must not be cross at other beavers either, for being unsympathetic. Whether or not the missing digit mystery was solved – or reversed – Sonny was determined to be the kindhearted beaver that Mother had raised.

Amazingly, Sonny could be a mommy or a daddy beaver. Sonny could even be a baby beaver. Or Sonny could not be a beaver at all – Sonny could be a person struck with rheumatoid disease (RD) – in the very heart of living life, working hard, loving his family. Boys and girls, I hope no one you love will be affected by RD the way Sonny was in our story. But if they are, maybe you know a little bit now about what it means.

There is one thing missing from our tale that makes Sonny’s experience so different from that of people who live with rheumatoid disease (PRD): Don’t forget that RD is a chronic disease with several other symptoms not in our story, such as pain and fatigue. PRD experience harsh symptoms that affect all parts of their bodies. In addition to rheum disability, it has been said RD is the most painful disease known.