Hypochondria is an elephant in the room with RA pain

The elephant house was always my favorite place at the zoo. We always knew when we were near it …by the smell.

So, how can an elephant creep into a room? They don’t exactly tip-toe. Maybe what happens is that nice people don’t discuss certain things, so no one asks, “What’s that smell?” It’s awkward to talk about certain things so we sweep them under the rug. Unless our shoulders hurt too much to hold a broom.

Hypochondria and exaggeration of RA pain, my eye

Yesterday, Jakki commented on RA pain in the Twilight Zone about her general doctor’s comment on her RA: “Oh so we’re in the chronic pain syndrome again are we… Well we all know about that! So does that mean he doesn’t believe me when I say it hurts or does he think it’s all in my head? … Not much physical damage to the joints and my blood counts are ‘normal’ I feel great about that! But why does it still hurt?? As I type this my chest feels like it’s having a knife twisted in there …I know I should have it checked out, but I don’t want them to tell me it’s all in my mind again. We know it isn’t ‘cause we have to live with it! No wonder we don’t want to go see these people.”

I read these comments from patients every day. I want to say the H word (hypochondria) out loud and expose the absurd notion that the pain of RA patients is…

We’ve talked about RA pain several times over the last year and I’ve read hundreds of comments. Most people who live with severe RA pain are the reverse of this list. What I’ve learned is that RA patients tend to understate their pain and manage it stoically. A large study about RA pain presented at ACR confirmed exactly that.

RA pain is the opposite of hypochondria

We’re all different, but why do most of us try to hide how much it actually hurts? As for me, I recall the shame of crying so much during the 29 hour labor with my firstborn. And so I always bear in mind the virtual silence of the four subsequent births. I refused to suffer that humiliation again. It became part of who I am like a PTSD. Maybe that’s what happens with RA pain for some of us. Maybe that’s why our new slogan “Hug gently. RA hurts.” is more popular than our other RA awareness t-shirts.

Three things I’d like to see change about RA pain 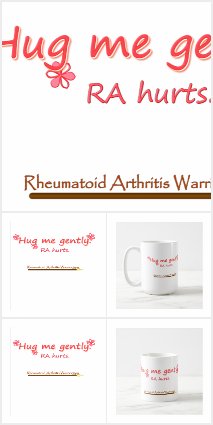 Will my email victory turn out to be a stupid failure?

This month the partnership to which my rheum doc belongs moved into the new century with patient email. Instantly, the email system provided patients like me a more precise and rapid method to communicate with doctors. I sent a note to the rheum doc as a follow-up to our recent conversation about nuclear bone scans. Two days later, the MA called to ask which hospital I wanted to use for the scan. It was truly stunning how efficiently the new email program worked compared to struggling on the phone with the MA.

Will I be sorry I got what I wanted? Maybe. The doc is worried for my sake that the test results will be negative, saying that they don’t confirm disease activity at least half of the time. I’m hoping this won’t be the “H scan.”

If only I could have gone for the test today. My RA fever was a little fiercer. About 20 joints seem to think that they are in labor. My shoulders act like they are nostalgic for the beginning of this flare five years ago. My arms are both frozen by my side. It really hurts. For labor, I didn’t even have Tylenol or Advil. Today, I have access to much more of course, but it’s helping very little.

31 thoughts on “The Hypochondria of RA Pain: Do I Smell an Elephant?”