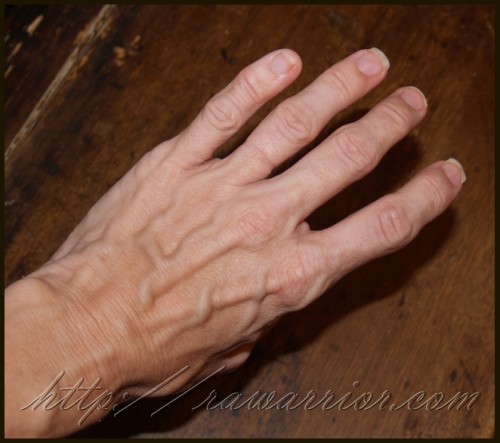 You’ve probably heard me say that Rheumatoid Arthritis is not a hand disease – principally. So many books and websites give particular emphasis to hands in the RA diagnosis process. However, I’m wondering whether it is clear what to look for.

Does it matter whether doctors or researchers really understand Rheumatoid Arthritis hands? Does it impact the way the disease is presented to the public? Could it have anything to do with the mistakes that are so frequently made with diagnosis and treatment of RA? Should we worry that there are no tests which objectively measure the activity of Rheumatoid Arthritis in hands?

The actual information in the article is pretty solid. There are even cautions about joint protection and avoiding painful movements. They just need a new headline writer. Wouldn’t it be great if an RA’er were hired to proofread some of these things?

Postblog: I’ve had hands on the brain because mine hurt more than ever right now. Every joint in both hands is painful, stiff, and increasingly weak. I’ll leave off  the long list I cannot do right now. I type at about 25 percent of my usual rate. I’m so glad I can type at all – at least until RA hands are clearly understood.

An interesting page from an orthopedic textbook showing some RA hand issues.