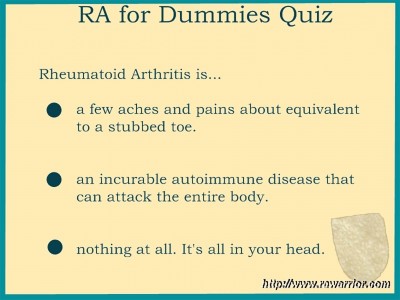 Studies show that people do not understand very much about Rheumatoid Arthritis. There are many misconceptions. But, you probably already figured that out on your own.

There is also confusion about the seriousness of the risks involved in RA, such as heart disease. It is not seen as a systemic disease. People do not recognize how it brings suffering and disability.

Is spreading the truth about RA necessary?

When I first heard about this “Year of RA,” I told friends it was the “coolest thing since ice cream.” I even sent a link out in an email. It was proof of what I knew by experience—and it’s always good to be validated.

I told one rheumatologist about the UK campaign and he called it unnecessary. He said, “I don’t think people are confused about RA. They know enough.” At the time, I was too shocked to reply.

But now I realize that it was a clue to our predicament. That same guy did not approve of using the internet to research Rheumatoid Arthritis. (I had given him a printout of the UK NRAS campaign article.) I guess he felt like knowledge is dangerous.

Proof of the RA ignorance problem

That doc is not worried about whether people understand Rheumatoid Arthritis. He does not encourage patients to learn more about RA. He does not approve of passing around printouts from the internet. He has never read an RA blog. He is ignorant of the ignorance.

But ignorance is not harmless

Ignorance of Rheumatoid Arthritis is especially dangerous. People who are already affected may not be able to receive the support that they need. Others may not receive an early diagnosis due to ignorance of the disease.

The UK campaign also seeks to encourage early treatment of Rheumatoid Arthritis. That is the only key we know which may help curb damage. People do not seek treatment if they do not know what RA symptoms are or that it is a serious life threatening disease.

Most people do not know what Rheumatoid Arthritis is. But, we know a lot about it. We need to speak up. We need to declare war on ignorance just like they are in Britain. We cannot wait for the medical professionals to do it for us. Some of them may be satisfied with the status quo.
NRAS study RA poll and Year of RA