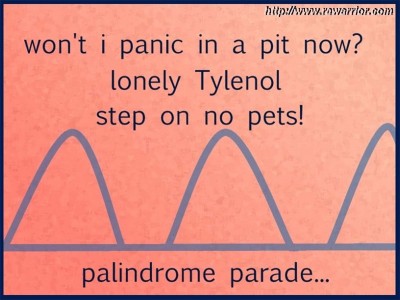 How many kinds of Rheumatoid Arthritis are there Anyway?

Nobody knows for sure, but the more you learn, the weirder it seems. Here is a type of inflammatory arthritis which you may not know about. They say it is rarer than the four general courses of Rheumatoid Arthritis which are in our cute chart.

Palindromic Rheumatism (PR) or Palindromic RA starts and stops spontaneously. It is a periodic arthritis. It can affect a few joints or a single joint at a time. It usually last only a few days.

The remission period is unpredictable. So the time between attacks varies. However, flares can become more frequent over time.

There is pain, inflammation, and disability when a joint is affected. There is of course no known cause or cure. Typically, it affects adults between the ages of 20 and 50. Intriguingly, people with PR often fail the same tests as people with RA – blood tests, that is. The anti-CCP test, the Rheumatoid factor test, and the ESR or sed rate are all used to indicate either RA or PR. However, these blood tests can also be negative in both of these forms of inflammatory arthritis.

How is Palindromic Rheumatism different from “regular” RA?

The most significant difference between Rheumatoid Arthritis and Palindromic Rheumatism is that PR does not usually cause any permanent damage to joints. In part, Palindromic Rheumatism is diagnosed by the absence of radiographic changes (X-rays often give evidence of RA, at least once it is well established.) And unlike RA, PR is an equal opportunity offender: it attacks both genders equally.

Probably. About half of the time, people who have Palindromic Rheumatism develop what I call “full blown” RA. Some doctors have speculated about why tests which are quite specific for Rheumatoid Arthritis also correlate with Palindromic Rheumatism. One theory which I have come across, more than once, is that PR is actually an abortive form of RA. In fact, many who have PR actually take DMARDs in hope of forestalling the onset of RA.

NOTE: Read this update on the truth about Palindromic Rheumatism!

14 thoughts on “What is Palindromic Rheumatism?”