This molecule has “the potential to further improve the most successful principle of folate inhibition in the treatment” of Rheumatoid Arthritis.

What if a folate antagonist could be made to target synovial inflammation without readily interacting with other sensitive types of cells? Could that increase effectiveness while reducing side effects?

A German researcher reports in the current issue of Arthritis Research and Therapy on EC0746, a possible methotrexate alternative. EC0746 is constructed by connecting the anti-folate aminopterin (AMT) to a folate moiety using a “saccharo-amino acid peptide spacer and a hydrazide/disulfide linker.” The folate moiety binds to folate receptors (FRβ) which have a restricted distribution in RA patients limited to “activated monocytes and synovial macrophages,” key sources of inflammation and cytokine activity.

If I were in the grocery store, I might say, “It looks like a chocolate-dipped banana. You can get the kid to eat the banana because of the chocolate that’s on one end.” So you end up with an anti-folate (aminopterin) similar to methotrexate that specifically targets the macrophages in synovial inflammation. In theory, it sounds good; and rats with induced-disease similar to RA showed improvement in joints and systemic disease symptoms.

Researchers say that EC0746 is 40 times less toxic than aminopterin because of targeting the folate inhibitor to the folate receptors. “Therefore, EC0746 is a classic example of the application of targeted drug delivery, in this case the targeting of the anti-folate (AMT) to FR-β-carrying cells.” 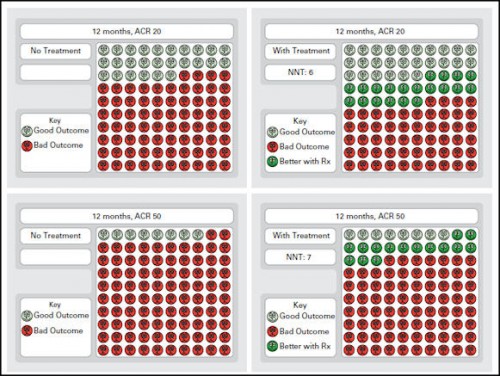 Why do we need a methotrexate alternative?

An alternative to methotrexate or at least a better delivery method would be desirable for at least 2 reasons: 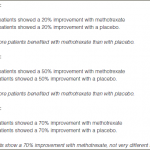 While methotrexate effectiveness was an obvious improvement over aspirin, a glimpse at the screenshot tells more of the story. Just look at the pain in those little red faces. A broad review of methotrexate studies in the and these images from a document on Evidence- based Rheumatology tell the story. Only about a fourth of patients reached about 50 percent improvement (ACR50) from methotrexate therapy (click image on right to enlarge). In one study, about 7 out of 10 patients had little to no radiological progress in the disease over 2 years with methotrexate. Claims of effectiveness vary, but better treatments are clearly needed.

I’ve looked at this older piece before and it looks like it was created as a tool to help convince patients that trying methotrexate makes sense: that most patients do all right as far as side effects and many have symptoms improved and probably a majority have fewer bone erosions.

It also convinces me we need more options.

Even though methotrexate has been shown to be safer than other disease modifying drugs in many cases, some have difficulty accepting therapy that makes their difficult life with RA even more troublesome. This is true in spite of evidence that methotrexate could help protect the cardiovascular system from Rheumatoid disease activity.

And although severe side effects may be rare, the specter of side effects looms for patients who must weigh long term risks since RA treatment continues over a lifetime.

Edit 9/22/13: BMJ link had been removed, so replaced with something that works today, a link to a Google book search.

30 thoughts on “A Methotrexate Alternative for Rheumatoid Arthritis?”