A biomarker is an indicator of a disease or of a physiological state.

Why do we need to find more biomarkers? 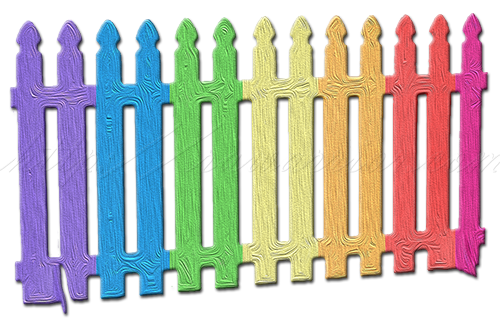 Finding the ultimate biomarker for Rheumatoid Arthritis / Rheumatoid Disease is like a proverbial pot of gold at then end of a rainbow – except there’s no rainbow. If there is one essential biomarker, that could lead to tests that indicate who has the disease and how active it is, while providing clues to a cure. Meanwhile, people living with Rheumatoid Disease (PRD) suffer long delays in diagnosis and difficulties obtaining adequate treatment.

Rheumatoid Disease (RD) is so heterogeneous that it’s likely there is not one biomarker, but several. I think that’s the mistake someone made with naming the first antibody associated with Rheumatoid “The Rheumatoid Factor” – they assumed it was the only one. An immune-mediated disease like RD may also manifest different symptoms in individuals because their immune systems are unique. For treatment, I think it may also be useful to identify subtypes of RD, and biomarkers would be extremely valuable in that.

So, the race is on to find either the best biomarker or the best combination of biomarkers for RD.

Recent studies of biomarkers for Rheumatoid

1) A small study in France identified three autoantigens (ZNF706, GABARAPL2 and WIBG) that may be useful in identifying early RA: “We identified new autoantibodies associated with RA with disease duration less than one year. These autoantibodies could be used as diagnosis markers in RA patients.”[1]

2) European researchers have been studying four candidate biomarkers (UH-RA.1, UH-RA.9, UH-RA.14 and UH-RA.21) that combine into one biomarker panel to help identify early RA. The study of about 300 people with Rheumatoid Disease (PRD) enabled the investigators to identify some patients who were otherwise seronegative: “Importantly, our biomarkers enabled the identification of 26% of the RF-negative ACCP-negative subpopulation, thereby closing the serological gap from 24% to 17% in this study population.”[2] That means about 7% more PRD could be identified by adding this biomarker panel to the usual Rf and anti-CCP.

3) The LITHE-biomarker study of 585 PRD treated with tocilizumab (Actemra) found “Baseline C1M levels correlated with worsening joint structure over one year. Serum C1M levels may enable identification of those RA patients that are in most need of aggressive treatment.”[3] C1M is considered a biomarker of tissue destruction because it is present in type I collagen degradation.

4) INOVA Diagnostics licensed a test to detect antibodies to carbamylated proteins (anti-CarP). Anti-CarP can identify some PRD who are seronegative with other biomarkers. The test is based on several studies by researchers in the Netherlands who pioneered anti-CCP testing. From the press release: “Anti-CarP antibodies recognize homocitrulline and are therefore distinct from anti-citrullinated protein antibodies (ACPA), including anti-Cyclic Citrullinated Peptide (anti-CCP), a biomarker commonly used to diagnose RA. Anti-CarP IgG and IgA were detected in 16% and 30% of ACPA negative RA patients respectively. Additionally, anti-CarP antibodies were shown to be predictive of a more severe course of disease as measured by radiological progression in ACPA negative RA patients.”[4] 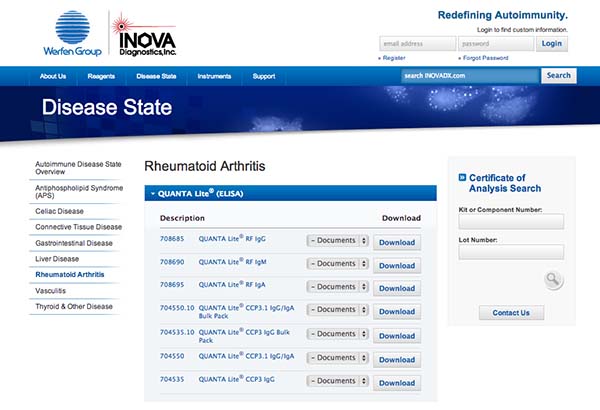 POSTBLOG: Some of the new biomarkers correlate with CRP and others such as Vectra are somewhat CRP-determined. It is important to find biomarkers that are independent of those that are currently available. One study showed that at least in some patients, the 14-3-3η identified disease activity in CRP-negative PRD. Just as with treatments, patients and doctors should both refrain from assuming that “one size fits all” with biomarker testing. It’s more like a rainbow after all.

IMAGE: a screenshot of the menu at INOVA Diagnostics. Imagine instead of two types of tests for RD, an entire rainbow of tests to fit individual patients.

DON’T MISS PART 1 OF THIS SERIES:

Blood Tests for Rheumatoid Arthritis: What Is Their Role?