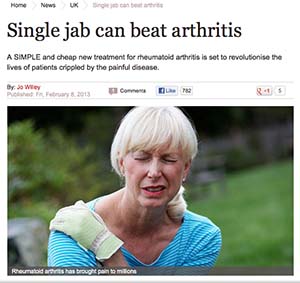 Is there an RA miracle treatment right around the corner?

Thanks to my mom and a couple of other RA-news watchers who sent me this news Friday about a so-called “single jab to beat arthritis.” Why do papers love stupid headlines? No, it’s not about “arthritis;” it’s about RA, an ill-named inflammatory disease. It’s not a jab (shot); it’s an IV. And no it’s not a one-time cure, but the effects could last for months, like rituximab. Anyway, here’s the news.

Arthritis Research UK researchers have launched an in-human trial of a single infusion of binding immunoglobulin protein (BiP). “The first-in-human trial will run for two years, and is being carried out by researchers from King’s College London and clinicians from Guy’s and St Thomas’ NHS Foundation Trust. It is funded by Arthritis Research UK and supported by the NIHR Biomedical Research Centre at Guy’s and St Thomas’ and King’s College London.”

If you think BiP sounds familiar, you’re right. It has been in the news several times. Dr. Valerie Corrigall of King’s College London said this is the culmination of fifteen years of research. Researchers hope “an intravenous dose of BiP will quickly boost the patients’ anti-inflammatory response.” BiP is a natural anti-inflammatory protein found in insufficient amounts in Rheumatoid patients.

According to Arthritis Research UK, the team hopes that a single intravenous dose of BiP will reset a patient’s immune system, possibly putting him in remission for months. For more, visit the Arthritis Research UK site (instead of the sites with reckless headlines and dumb photos).

Thursday, Eli Lilly announced an end to its Phase III trials of the anti-BAFF (B-cell activating factor) monoclonal antibody tabalumab. Lilly maintained that the safety profile of tabalumab was not a problem, but that the trials failed to demonstrate effectiveness in RA. However, vice president of autoimmune product development, Eiry Roberts said the Phase III tabalumab trials for lupus, called “ILLUMINATE,” continue.

The fox hunt for bone-destroying cells

Finding the cure for Rheumatoid Disease is a long and winding road. Sometimes it seems like two steps forward, one step back, but remember that every failed trial still informs us. Inventor Thomas Midgley described this Thomas Edison-like approach: the trick is to turn a wild goose chase into a fox hunt (see Wikipedia).

Last month, researchers at the University of Michigan identified “how a specific group of genes works behind the scenes to activate the bone-destroying cells that cause severe rheumatoid arthritis, a debilitating health issue for millions of Americans.” Lead investigator Joseph Holoshitz said this research could lead to a “significant breakthrough in our understanding” of how genes associate with RA risk.

A breakthrough could be right around the corner. Or there could be another bend in the road first.

9 thoughts on “New Treatments for Rheumatoid Arthritis: the Research Road”