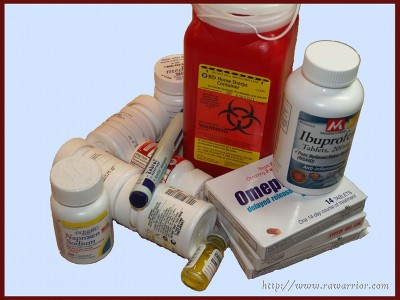 There is a difference between disease control and symptom control for Rheumatoid Arthritis.

There is no Rheumatoid Arthritis cure. You probably gathered that from yesterday’s funny blog. However, there are medications which can curb many of the effects of RA by actually cutting back the activity of the immune cells.

These are the medicines referred to as DMARDs: disease modifying anti-rheumatic drugs. The most common are methotrexate and Plaquenil. There are others, but those are used the most today because they are considered the most safe and effective.

Biologics like Humira, Remicade, and Enbrel are also used to hinder disease activity. This is a newer class of DMARDs. For a very few people, DMARDs bring on a complete remission of the Rheumatoid Arthritis.

If you have taken them, though, you know that they are not a cure. They reduce the activity of the rheumatoid disease by interfering with some immune cells which attack us. But those immune cells continue to multiply and fight back. That’s one reason that I say this is like war.

The disease has its weapons – various B and T cells and the cytokines they produce. And you have yours – medications, nutrition, and various therapies. If we had a cure for Rheumatoid Arthritis, then we could fire that ONE weapon and be done with it. Someday we’ll be there.

Meanwhile, back at the ranch… We sit in our tank and fire our big DMARD guns at the rheumatoid disease. This way, we cut the enemy down to a more manageable size. However, then we still have to deal with what I call the “leftovers” – the many symptoms of Rheumatoid Arthritis which are left after the DMARD has delivered its blow.

To fight those, we use extra medications which include the following:

As warriors against Rheumatoid Arthritis, we might try to take as little total medication as we can take – and still be able to live our lives fully. Most RA patients live with lots of “leftover” pain.

Why do Rheumatoid Arthritis patients live with leftover pain?

It can be hard when you are deciding whether to take more medicine so that you can get out of bed or whether you want to save your stomach, liver, or kidneys. It’s like a game of Risk.

It is war. So we need to be strategic. If we are going to use any “big guns,” then they should be the ones which can do the most damage to the enemy.

If we were shopping, we’d ask: What will give me the most bang for my buck? Usually, that means giving priority to taking whatever combination of DMARDs will provide us the most disease control possible. Then, after that, we decide how we’ll go after the leftovers. We have to – so that we can function.

It’s not a perfect strategy, but it will do until the cavalry comes …with a cure.