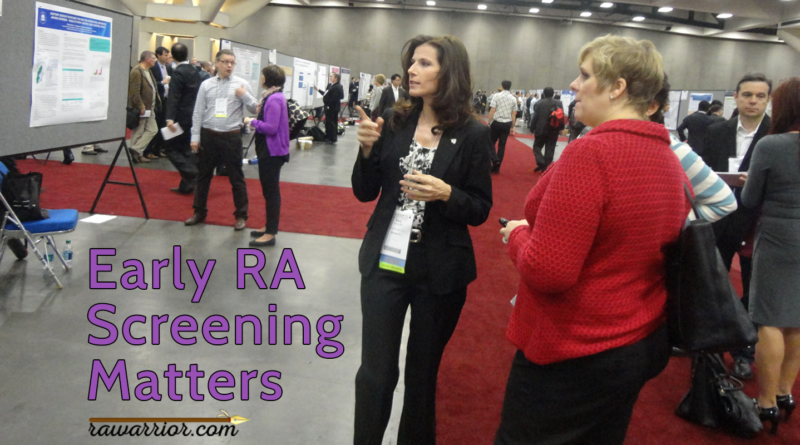 Every day my email box and social media streams are filled with “exciting” news of promising RA breakthroughs and so-called cures. But rarely is there news that I know will make a difference—either to investigators studying rheumatoid disease (RD) or to people living with RD (PRD). Today, with regard to early RA screening, we have both.

First, last month I was excited (for real) to read newly published results of the PRAIRI study, Effects of B-cell directed therapy on the preclinical stage of rheumatoid arthritis.1 Dutch investigators administered a singe dose of rituximab to 81 people at high risk for developing RD. They saw a 12-month delay in onset of joint symptoms, compared with those who did not receive rituximab. Of course, rituximab is usually given in multiple doses, making this finding even more remarkable.

Early RA screening for pre-clinical RA is not a new idea. In fact this report might not surprise you if you’ve read my book—I’ve closely followed research on so-called “pre-clinical” RA and fiercely advocated treating very early rheumatoid disease. Several investigations have suggested that it’s possible to delay or prevent onset of full-blown rheumatoid disease. As I’ve said many times, this IS OUR CURE—at least for now.

Second is the launch of a first-time ever at-home early RA screening test. The at-home test from imaware™ is done in five minutes with a few drops from a single finger prick. It is reviewed by a doctor and includes information you share about symptoms and family history.

imaware™ actually tests three antibodies highly predictive of rheumatoid disease: one type of anti-CCP / ACPA and two rheumatoid factors. I’ve written quite a lot about RA tests over the years so you may recall that RF’s tend toward positivity over time with the disease, but ACPA’s tend to be positive earlier—even before symptoms are persistent. The PRAIRI study reports that both antibodies “can be found in the peripheral blood of individuals >10 years before the development of autoantibody positive rheumatoid arthritis.” I have some read reports of antibodies being present up to 20 years before diagnosis, but of course 10 years is incredible.

Take a moment: that’s a possible 10-year warning for a disease with a six-week window of opportunity for successful treatment and the choice of either preventing full-blown disease or suffering progressive disease that doesn’t respond to current treatments (like me). Early RA screening puts us at the verge of major change of the disease model—change that I’ve advocated for a decade. That begins with recognizing “preclinical” disease—that RD does exist before finger swelling.

Because I believe so strongly in helping people be diagnosed earlier, I am working alongside imaware™ as a patient liaison during the launch. I will ensure that what they do is patient-centered and benefits the #rheum community. They are giving patients a voice by working with me, which is another thing I’ve consistently advocated for over ten years (industry putting a patient on the team instead of stealing their content, etc.).

I would have wanted to know earlier whether I had the markers for RD—and to be treated earlier. Early RA screening is a first step. We need to continue researching the best ways to prevent “clinical” disease symptoms because as the study says, waiting for obvious persistent symptoms as rheumatologists do now allows for “only a small minority of patients achieve disease remission.”