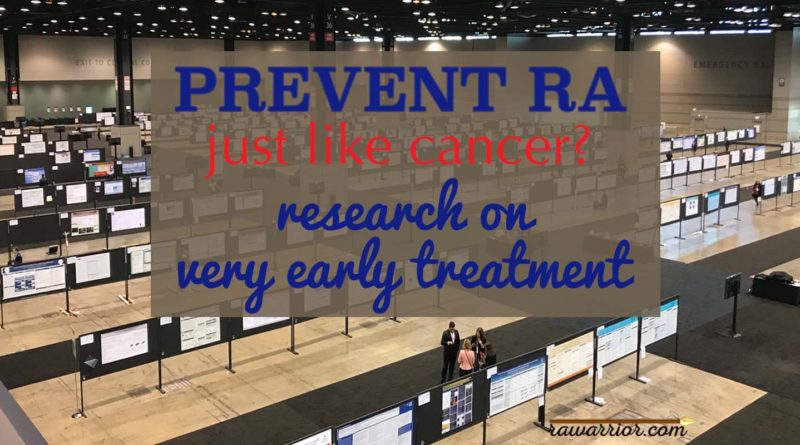 Several studies presented at the American College of Rheumatology’s (ACR) Annual Scientific Meeting in Chicago last fall are investigating how to prevent RA. One poster in particular, from the Netherlands’ group, presented startling results as they re-analyzed data from the PROMPT trial. They concluded that a one-year course of methotrexate could prevent RA or delay its development.1

In the new analysis, they excluded results of people with a low risk of being diagnosed with RA. They only included people with a high risk of RA.

How often did they delay or prevent RA?

In all, 22 people had a high risk of RA. Of those who received a placebo (no real treatment), 11/11 or 100% were eventually diagnosed with RA. Of the 11 people treated with methotrexate, only 6 people or 55% were diagnosed with RA after 5 years follow up. The diagnosis of RA was also delayed in the methotrexate arm of the study with an average of 22.5 months versus 3 months with placebo.

Early treatment of RA—before typical “clinical” RA diagnosis—also impacted whether people experienced RA remission. “Drug-free remission was achieved by 4/11 (36%) of patients in the MTX-arm and by 0/11 (0%) of the patients in the placebo-arm.”

What do we mean by prevent RA?

This question is a little tricky. Clinical diagnosis of RA aka rheumatoid disease (RD) is a bit of a semantic argument. If we know someone with RD symptoms, we might think, “They have it, but they’re not diagnosed yet.” However, in the medical community, you don’t have it until you are diagnosed.

To be diagnosed with RA, you have to show “clinical” symptoms to a rheumatologist so that she is convinced you meet the criteria. That’s why you’ve heard me say over the years that people usually have to be swollen in the right place (hands) at the right time (during a clinic visit) to be diagnosed. Then, it will say in your medical record that you had RA since that day—not whenever your symptoms started.

If you’ve read my book, you understand the distinction because you know that RD doesn’t start in the hands and hand swelling is seldom the first symptom. You also know that investigators are working hard to learn how it starts so we can learn to stop it.

If we think like cancer doctors, we can prevent RA

For about a decade, I’ve been saying, “Arthritis is just one symptom.” And it’s absolutely caught on to begin changing the mindset of RA as a type of arthritis. But now we need to add this: “Think like cancer doctors” to prevent RA / RD.

In the PROMPT trial discussed above, it only took a one-year course of methotrexate to prevent or delay “clinical” onset of RA / RD. If you’ve read my book or much of my blog, you know that RD was already present in their bodies—just not showing up in the way that rheumatologists diagnosis it. The one-year of methotrexate—very early in the disease process—stopped the disease in its tracks the same way that a course of chemo or radiation could stop cancer cells from dangerously growing.

Rheumatology has been preaching to “treat early” for several years. It’s just a matter of understanding how early that is possible. Like they do with cancer, maybe we could screen people at high risk of RD. Maybe people with undifferentiated arthritis (arthritis in several joints, but not diagnosable as a particular disease yet) should have their blood tested for antibodies common in RD. (Yes, they should!)

I’ll have more to say on how to “think like cancer doctors,” but I’d love to hear what you think of this. What was the first RD symptom in you or the patient you love? Leave me a comment below; you are also a great resource for other readers.

Rheumatoid Awareness Day is only a couple of weeks away. Stay on top of all the news from the Rheumatoid Patient Foundation (RPF) at http://rheum4us.org