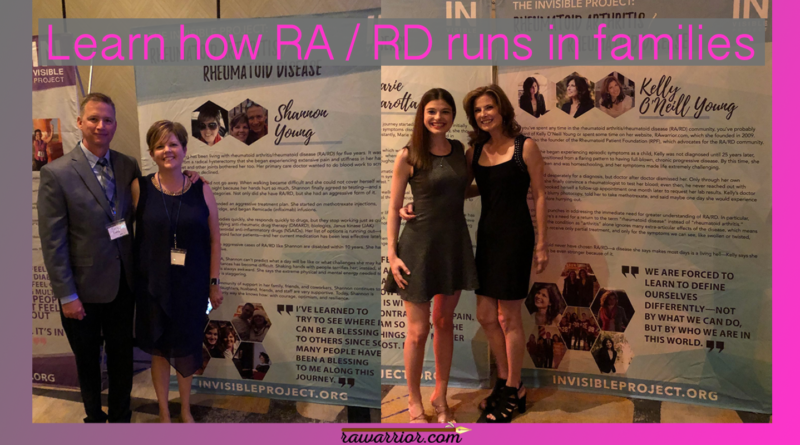 I have always said that the people you meet when living with this disease—or because you do—are the greatest side effect. That’s one of the things I would not change even though I hate rheumatoid disease. Some of my best friends connected with me first through RAW or its social channels.

A few years back, I met this spunky blonde named Shannon. She took it upon herself to persuade her city council to create a proclamation for Rheumatoid Awareness Day. It’s not hard to imagine how a few years later she ended up on the RPF’s board of directors.

Last year, Shannon and I were finally together in person when she traveled with her husband to Arizona for the US Pain Foundation’s Real Hope, Real Heroes Gala. My significant other was my daughter KB—we had great fun chatting about wedding gowns since Shannon’s daughter and KB were both getting married last fall. Coincidentally, we were all named “Young” at the time.

I learned about Shannon’s other daughter when she volunteered to do some work for RPF. Sharing our two—each—beautiful young daughters was just another link between us. Soon there would be one more that we did not expect.

RA runs in families—but what about our families?

When I heard the news of a new at-home RA test, my daughters were my first thought. Testing for three antibodies instead of just one—good idea. And not having to convince my daughters to find a doctor who believed they were at risk for RA, actually go to the doctor, and then go to the lab—great idea.

Meanwhile a similar train of thought at Shannon’s house thousands of miles away. Suspicious symptoms in her mom should be checked out—hmm, good idea. Make sure the girls are ok, too—great idea.

Over the next couple of weeks, our family members got the test kits in the mail. They each pricked their fingers and gathered a few drops of blood in a tiny vial. And they mailed the kits back to imaware™. And then we waited for the reports.

Yes, I also pricked my finger—but let’s save that story for another day.

They say RA runs in families—it that true?

You’ll read many places that rheumatoid arthritis cannot be inherited. Technically, that’s true because there is not one specific “RA gene” to be passed down in DNA. However the old adage “RA runs in families” is actually more accurate. Through our parents, we inherit variations of genes and combinations of those variations can confer risk—not the disease itself.

Harvard genetics professor Dr. Robert Plenge says that children of people with rheumatoid disease (PRD) have a five times greater risk of the disease. The risk of RD / RA in the general population is one percent—it is 5% in children of PRD. According to Dr. Plenge, there are probably dozens of genes that each contributes a very small risk. The other factor, which we have discussed on RAW, is triggers—things we are exposed to which also increase risk of the disease.

Next time, we’ll finish our story. BUT MEANWHILE, WHAT’S YOUR STORY? Does RA run in your family? Are you worried about your own children or grandchildren? Share in the comment box below.

21 thoughts on “RA Runs in Families”